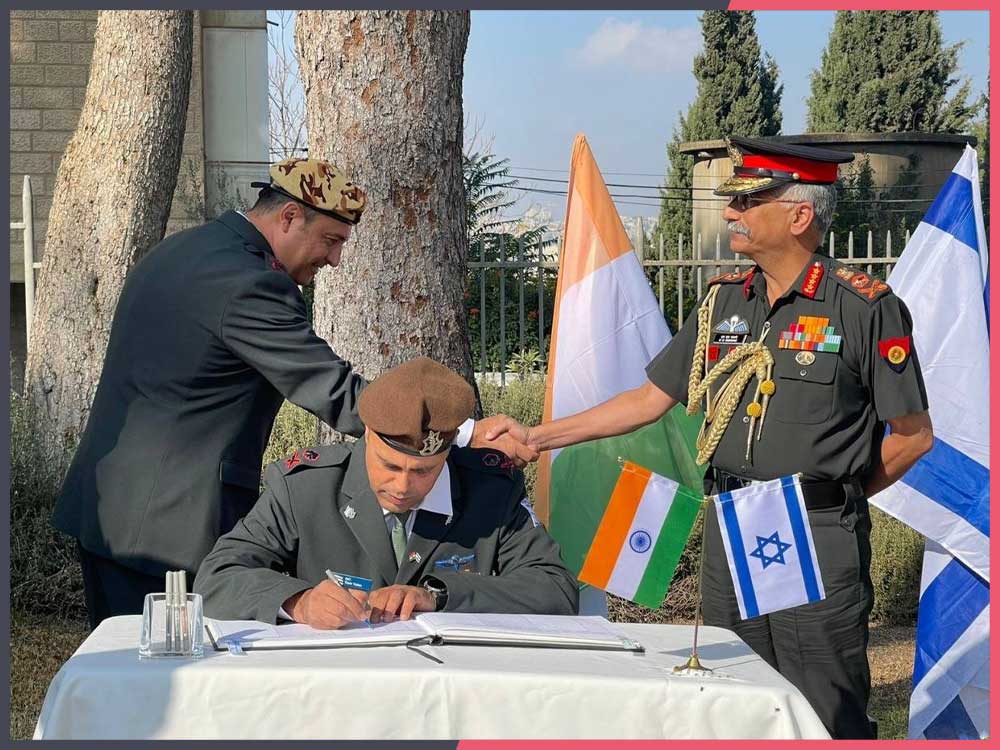 Lt. Gen. Aviv Kochavi, Chief of Staff of the Israel Defense Forces, and Maj. Gen. Tamir Yadai, Commander of the IDF Ground Forces, met with Gen. MM Navarne. He attended several briefings on Israel’s military capabilities, and Israeli defence officials believe the visit improved and enhanced both personally and professionally the ties between the two forces.

Naravane also visited historical places in both nations, such as the Indian graveyard in Jerusalem and the Yad Vashem World Holocaust Remembrance Centre. The visit is considered as the latest manifestation of Israel and India’s close military and political ties.

In the future, both countries hope to increase their cooperation in a variety of sectors, including the bolstering of their forces.

According to Professor Efraim Inbar, head of the Jerusalem Institute for Strategy and Security, Israel has a “comfortable strategic collaboration” with the present Indian government and Prime Minister Narendra Modi.

“They see Israel as a strategic ally,” Inbar explained. “India is interested in a multilateral world in which India is a major player.  This vision includes Israel.”

He mentioned India’s continuous struggle against foreign terrorism and jihadist activities as driving Indian decision-makers to believe they are confronted with identical issues as Israel.

“The ethnic-religious strife in Kashmir followed a chaotic separation, much like the partition here,” Inbar explained. “They rightly detect parallels.”

However, India perceives a second hazardous front—China—which, according to Inbar, eclipses the Pakistani-Kashmir front in India’s threat assessment.

At the beginning of the month, Indian media claimed that the Indian Army had deployed four Heron drones built by Israel Aerospace Industries (IAI) to assess Chinese military actions in the Ladakh area.

In 2017, IAI announced a mega-contract worth more than $1.6 billion for the supply of upgraded medium-range surface-to-air missiles and missile-defence systems to the Indian Army. A year later, IAI announced that it had been given an additional $777 million mega-contract for the delivery of the marine variant of the Barak 8 active missile-defence system for seven Indian naval ships. The contract was signed with the Indian state-owned business Bharat Electronics Limited, which acts as the project’s principal contractor.

“India has a ‘Make in India’ strategy, and the US is less eager to execute technology transfers.” “Israel is more flexible on this and on co-production,” noted Inbar. “Israel does not offer vast platforms, but rather concentrates on a specific niche where it has a significant edge.”

“India recognises the capabilities that have evolved here—not only in defence, but also in technology and other industries,” he continued. “A substantial number of Indian officers visit Israel.”

This fall, India was one of eight countries that took part in the Israeli Air Force’s Blue Flag international air practise in southern Israel, which saw a total of 70 aircraft fly out of Uvda Air Force Base north of Eilat.

It was the first time India deployed a squadron to an Israeli exercise, using Mirage planes.

Indian fighter-jet pilots told JNS at the time that the exercise provided them with “excellent training value,” and that the mix of fourth- and fifth-generation aircraft was something they had not yet encountered back home.

“The future of this partnership will only be more successful,” Inbar said.